These are my notes after watching Hartmut Kaiser’s keynote talk in C++14 con. youtube link

Although seems like there is no textbook definition of a thread, the talk mentions that thread has four properties:

The talk also divulges into std::thread and execution agent but I felt they were only included for complete-ness sake and I just give these bullet points as is:

all references are from N4231: Torvald Riegel: Terms and definitions related to threads

Taking from this SO Answer:

Which I feel seems like a more contrived way of saying things, but, it captures the essense in whole.

captial for emphasis and not shouting

WE SHOULD MAKE CONCURRENCY HIDDEN AWAY UNDER THE HOOD

LIKE, WE DON’T USE GOTO STATEMENTS ANYWHERE BUT COMPILER STILL USES AND IT’S STASHED AWAY UNDER THE HOOD

WE HAVE TO DO THE SAME WITH THREADS

It seems like Parallelism is better. I don’t get this. And, the speaker advocates that parallelism is much much better than concurrency.

Are you multi-threaded? Only one way to find out. It’s like how device kernel can’t launch another device kernel. That luxury is missing here. What if I launch a team of threads and if each of the thread launches other threads. ayy lmao, we just over-subscribed.

OpenMP offers a modicum of luxury here. We can set the max number of threads we want to spawn, but that’s super super local. Library itself has to offer a way to set the number of threads which for the miniscule amount of time my brain thought about it, seems like it’ll be pain.

OpenMP lets you control this.

This is a problem everywhere, hpx, omp, ompi.

This is in the hands of the problem statement or the algorithm.

The 4 Horsemen of the Apocalypse: SLOW

I so want to replicate the graph T - T

Overheads are the most dangerous. Let’s do a gedanken experiment. If we have a work for 10seconds, and we vary number of threads, what’s the speed-up we get for a fixed overhead of threads? 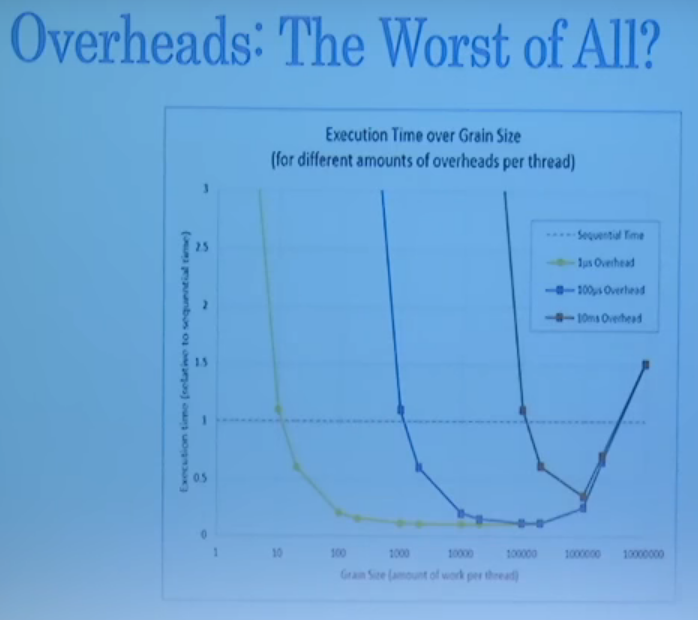