Humans perception of randomness is flawed. Atleast mine.

If we are asked to populate a list of natural numbers, we would not want to repeat any natural number one after the other in its immediate vicinity.

We do this automatically out of our belief of randomness that same things can’t repeat in case of randomness.

Two Google results and skimming through a science-direct article later. I stumbled upon this clumping theory. Book here.

I only read a paragraph in the preface, though. Someday, I will read the book. I think I remember making a post about this crippling weakness of mine that I can’t complete things. I hope it’s OK. Anywayyyyy,

So, let’s wear our combinatorics hat and compute the number of ways to have perceived randomness.

I believe that our wrong perception of randomness comes from trying to live in a finite discrete world.

In all the examples where we show that wrong bias is when we are asked to choose a strings of elements from an alphabet. This is exactly the case of finite discrete.

SO, we define perceived randomness in an finite discrete setting.

Given an alphabet \(\mathcal{S}\) with cardinality \(S\), we are asked to choose \(L\) elements in an ordered fashion.

True randomness would mean choosing truly randomly. But, perceived randomness will add an constraint that, \(i^{\rm th}\) element is not repeated when looking \(r\) elements back.

This constraint ensures and makes us think that it’s truly random since there is no clumpiness.

To repeat and formulate the problem:

Given an alphabet \(\mathcal{S}\) with cardinality \(S\), find the number of ways to populate an ordered list of \(L\) elements taken from \(\mathcal{S}\) with repetiton such that any element of of any list is not repeated in any of the \(r\) digits preceding it in that list.

Assuming \(r \lt L\) otherwise it is trivial and not discussed here.

At \(r+2\) element, in case we were doing no repetition, we would have \(S-r-1\). But, we are doing this, we can in principle reuse the element in the first element, so the total allowed elements are \(S-r\), same as above.

Which if we simplify,

Seeing so many factorials and powers, to makes these numbers managable, let’s just take log and apply Stirling approximation.

Let’s compute the derivative of the log expression w.r.t to \(r\) for fun.

This is thankfully a linear expression in \(r\), so we can quickly find where derivative is positive and where it is negative.

So, we showed that for our interests, the function is strictly decreasing.

Hence, the sum of function values at all \(r\) should converge, meaning the function can be normalized.

This means, the function can have a probability sense if we can just normalize it.

Given these log probabilities, to normalize it, we just use softmax to make our lives easy and not suffer from any overflows. See this.

At this point, it becomes kind of clear to me that it’s better to proceed further numerically. 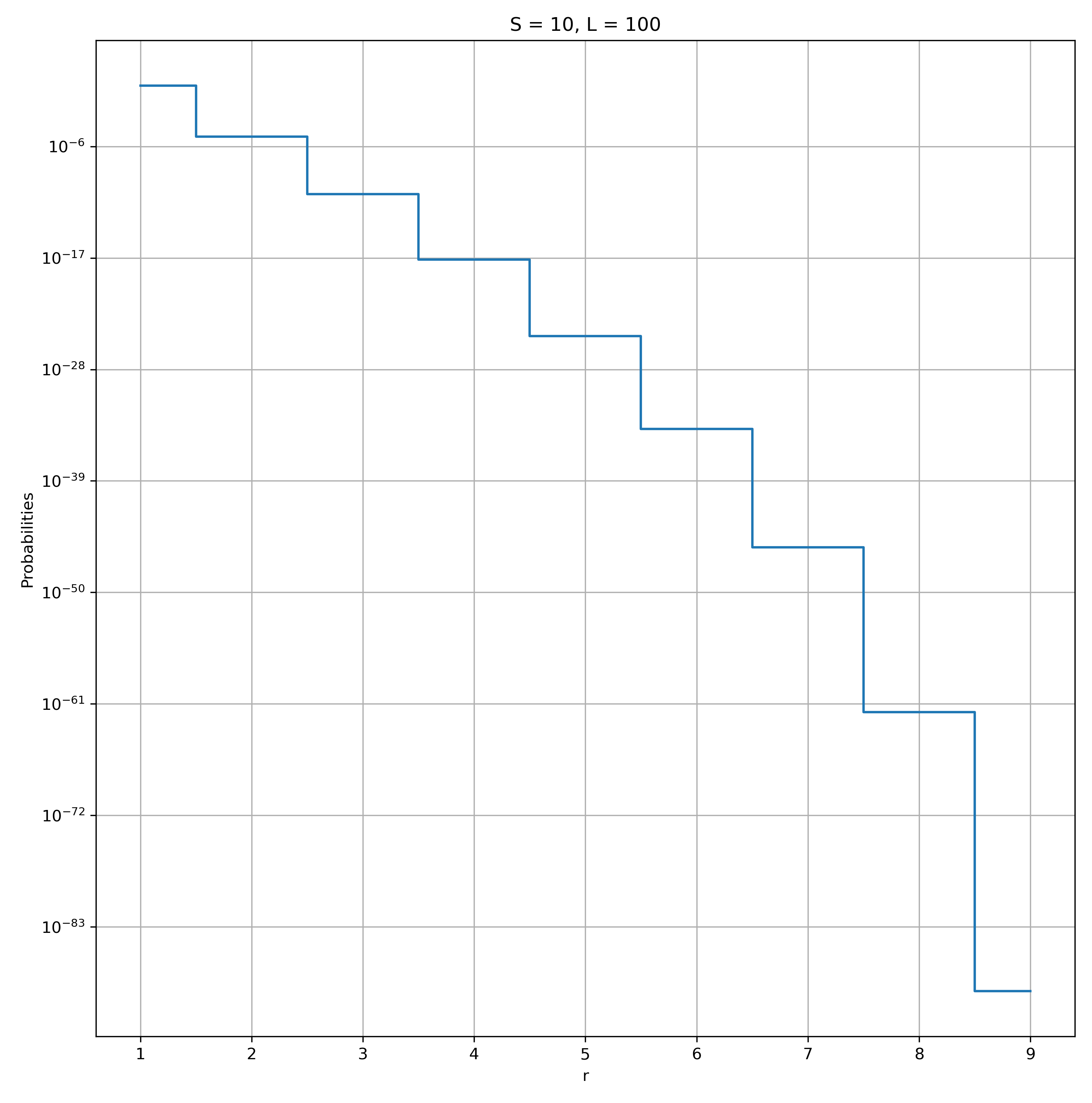 I don’t know how to interpret this since what do we even mean by probability here? We were so obsessed with whether we could or not, that we didn’t stop and ask ourselves whether we should. Lol.

This is in \(1D\). We don’t know how this would look in multiple dimensions.

It would be interesting to see this in an actual survey with real participants.

So, we struggle a bit. Or maybe we are just dumb.